Yin Yoga and Food: How to Improve Your Eyesight and Reduce Anxiety

A while ago, I attended some further Yin Yoga training: this course was focused on the relationship between Yin Yoga and the acupuncture meridians of Classical Chinese Medicine. A great deal of the information presented resonated with me. At the end of the course, I was kind of pleased to conclude that I’m pretty average: like many people, I have poor eyesight and can be prone to worry. These came across as some of the most common pathologies, and that’s no surprise. I’m very pleased that now, I have some additional tools to use to help myself with these. I’ll briefly discuss this further.

The model presented – Traditional or Classical Chinese Medicine – firmly relates emotions to organ systems. In the West, we tend to think of an emotion as something separate from the body, even though it’s clearly expressed through the body (eg, laughter, panic, etc). For CCM practitioners, the emotion and its designated organ are two expressions of the same thing. This feels like a more realistic way of interpreting the physical body and its emotional expressions: no emotion comes without a physical effect, and many things we do physically will affect the way we feel.

I used to work in IT – I did that for a long time. I was very fortunate in the later years of that to have a window seat. I would occasionally look out of the window and adjust my focus on different depths of field, focusing at different distances, and with different angles of sight. My eyes were healthy, and my prescription was steady. Ironically, when I became a Yoga teacher, I spent much longer staring at my computer and I didn’t exercise my eyes. My prescription became progressively worse, and my stress levels grew. I was self-employed: no sick pay, no holiday pay, and I cared deeply about what I was doing rather than how much it paid me.

I’ve now been working for myself for nearly ten years. It’s gone very quickly. Hans Selye did some ground-breaking work on stress in the 1930s, documenting how our bodies try to adapt to long-term stress. Of course, there’s a cost to the body: one of the effects is generalised anxiety. The body has adjusted to stress by building stress into the system – everything is running at 110%, even when it really doesn’t need to. The mind experiences this as the familiar feeling of ominous, background threat – or as we say, anxiety. Remember that CCM sees body and mind as two aspects of one thing: the emotion is as much a part of the pathology as the measurable chemical symptoms.

In the case of eye health, I resolved to reinstate the same eye exercises that I used to do. I am fortunate to have a comparatively big garden, with a building and some trees at the end of it. There’s a deck near the house – in other words, there are lots of details at different distances that I can move my gaze between. I’ve already noticed improved focus: I like to walk in the countryside, and I can discern distant detail more sharply than before. I’m not expecting to reverse the condition of my eyes and throw away my contact lenses, but I’ll happily settle for no further deterioration.

CCM offers a lot of dietary advice: in fact, nutrition seems to be the cornerstone of the health system. Doesn’t that make sense? We’re routinely told to avoid excessive sugar, salt, fatty foods and alcohol. That’s a great start, but it’s not much guidance. That leaves it open to eat some pretty awful things, full of artificial sweetener and/or synthetic compounds. Of course, just a glance around the supermarket reveals that there’s very little in there that isn’t heavily processed. And that’s before American food regulations come in! It’s all labelled as low-fat, low-sugar, low-salt, and sometimes, that’s a disguise for stuff that’s not really great to eat.

When it comes to worry, CCM would say that the stomach and small intestine are under strain. They can’t separate out the clean energy and/ or are unable to present it to the rest of the system. Personally, I’ve eaten a lot of raw vegetables for a long time. That’s because I like them: I like the diversity of tastes and textures; I think it’s often more interesting than cooked food where flavours have combined. Also, I personally believe that people often don’t eat enough vegetables. I don’t feel that 5-a-day is enough. If we are limited to 5 portions of fruit and veg a day, then how do we make up the rest (the majority) of our food intake? It would be too easy to pack the diet out with processed grains or processed meats. However, I can receive the CCM wisdom that cooking food helps the stomach and small intestine to process it. The upshot is that I’ve found home-made soup to be a great alternative to a crunchy salad: I can still get plenty of veggies in, and I can allow the cooking process to begin breaking the food down before I eat it. I’ve included my own recipe for carrot and coriander soup below.

Finally, it’s worth mentioning the role of the heart. I’ll keep it brief, but we’re encouraged to see the work of the heart as more than just beating to drive the circulation of blood, but also to be reflected in the strength and quality of our relationships (and vice versa, where relationships are problematic). The relationship with oneself is a key factor in quality of life. Recognising that it’s time to take positive action to improve one’s own health and lifestyle, and following through, shows a commitment to oneself.

Join us online right now for Yin Yoga to learn more. And, very soon, you will be able to join us at our Hot Yoga Studio in Bristol to enjoy Hot Yin with us in person!

Carrot and coriander soup
Lots of carrots – any colour – cut to equal sizes
Roast them until about half cooked in a little olive oil
Then dust liberally with sesame seeds, and season well with salt and pepper
While they complete roasting, also roast lots of garlic – as much as you personally like
Make up or use your own vegetable stock
When the carrots are cooked, add to a bowl (avoid plastic bowls if possible)
Add half teaspoon of cumin and lots of fresh coriander (stalks and leaves), or a teaspoon of
ground coriander
Add plenty of roast garlic – as much as you like
Add some stock and begin to puree
Keep adding stock and puree-ing to the consistency of your preference
Taste, and season further with salt and pepper as desired 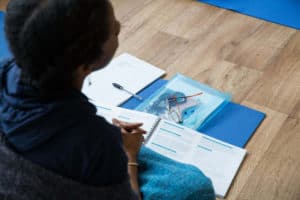 How Yoga boosts and strengthens your immune system

This year has brought to our attention how health and wellbeing is something to both promote and value. And with so many restrictions in place