WHAT DOES IT MEAN?

As you can see, four limbs really are supporting the staff of the spine! In one of the pictures, you can see that we have body-painted a teacher so that we can demonstrate more about the anatomical structure of the pose. You can learn more too – see below for details.

The pose doesn’t feature in hatha yoga texts until Iyengar’s 20th century Light on Yoga. However, it does appear in the 1896 Vyayama Dipika, a manual of gymnastics, where it is described as being part of a very old sequence of danda (“staff” or spine) exercises. The video below shows some Vyayama exercises.

Vinyasa students will know chatturanga dandasana as part of the Sun Salutation sequences. It’s usually timed on an exhale, with the drishthi (or gaze) downwards. It can be practiced as a stand-alone posture however, and held for five or ten breaths, or even more if the student has the strength to maintain integrity and alignment.

The video above shows the traditional, counted sun salutation (A) sequence, following the opening Ashtanga chant. The practice is lead by Sri K Pattabhi Jois, who was taught by Tirumalai Krishnamacharya (often called the father of modern Yoga).

Ashtanga Vinyasa Yoga history states that Krishnamacharya learned the system of asanas (postures) and vinyasas (transitions) from the Yoga Kurunta, an otherwise unknown document apparently written 5,000 previously by Vamana Rishi. Krishnamacharya copied it out and taught it to Pattabhi Jois, from whom it came to the West. The original manuscript was supposedly destroyed by ants unfortunately and no copy survives. Chatturanga doesn’t appear in Krishnamacharya’s did Yoga Makaranda (1935) or his Yogasanagalu (c. 1941). However, the Yogasanagalu did contain tables of asanas and vinyasas, comparable to the taught system.

This makes a dramatic difference to how your body supports the posture.

Another big difference between chatturanga and press-ups is how it’s taught. We can’t speak for anyone else, but here at Yogafurie, we are real sticklers for technique. We ensure that students learn how to engage not just shoulders and chest, but core and legs also – the whole body really. We also demonstrate and teach a range of modifications and alternatives, so that everyone can join in sun salutations safely, regardless of capability with chatturanga dandasana.

Some people call chatturanga dandasana the crocodile pose, because of the similarity of body shape when arms are bent with elbows drawn back.

The crocodiles – or their freshwater counterparts, alligators – are important animals in many traditions. They symbolise leadership, intelligence, endurance and primal power. Crocodiles evolved around 245 million years ago. They were venerated for great wisdom having survived this long. And as such, the crocodile is also seen as the primal mother. There is no strict association between the posture and the totem animal, butit’s interesting to reflect on how our movements can inspire our knowledge and interest other cultures, for whom animal symbolism is still very real.

The traditional imagery for svadhisthana chakra includes a green makra or crocodile. Svadhisthana is all about our flowing nature, how we can move joyfully through life like water playing over rocks. The makra is an emblem of the waters and it’s the vehicle of the god Varuna, lord of the sea, who has full control over this fluidity of nature.

COME TO OUR WORKSHOP

Clearly there’s a lot to learn about Chatturanga. You can explore deeper at Yogafurie’s upcoming workshop, where you can join our teachers Aaron (body-painted above) and Jemitra for an in-depth exploration (they promise to not make you do Chaturanga for 3 hours!)

In this workshop, you will work with Utthita Dandasana (High Plank) and Chaturanga Dandasana (Low Plank). Through a combination of discussion, partner drills and solo work, we will make an in-depth foray into these two poses.

Call or email us to book your spot.

Yin Yoga and Food: How to Improve Your Eyesight and Reduce Anxiety

A while ago, I attended some further Yin Yoga training: this course was focused on the relationship between Yin Yoga and the acupuncture meridians of 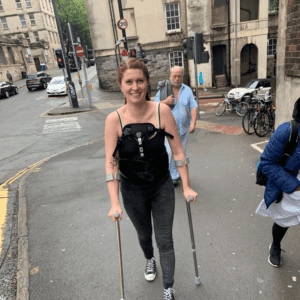 July 17th 2019 is a date that I don’t think I’ll ever let myself forget. The trauma of the accident, how close I came to