I am writing this the week I retired as a primary school teacher after 30 years. I cannot quite believe that it’s been that long or that it’s now over!

As the date of my retirement drew nearer, I found myself think about legacy and asking what would mine be? Every child is entitled to an excellent education, that gives them the skills and knowledge that they need, as well as engendering a curiosity about the world, resilience in the face of challenge and the emotional capacity to enjoy strong relationships. I know I have worked hard with creativity and passion to provide all of this in my classroom even though ‘the system’ (don’t get me started!) often feels like it’s working against these goals. I have two voices in my head when it comes to this: the first says that’s enough of a legacy, for even if they forget me, I have planted the seeds and after that, other forces are at play that will dictate how and if those seeds will grow. I am happy with that and feel privileged to have had a career that feels meaningful but….. then the second voice pipes up! ‘Is it enough? You need something more.’

So I’ve come to the conclusion it’s impossible say what my legacy is, but I can say what I would like it to be. I think if I was asked this question each decade of my career, I would have had a different answer each time. At this time, without hesitation I would say I want YOGA to be my legacy!

Over the past 6 years or so I have been teaching yoga to all the Year 3 children (aged 7-8 yrs) in my school, roughly 360 children in all. I first had to overcome my fear of teaching it wrong. I justified going ahead using the reasoning that I have taught netball, hockey, football and tennis without any special qualifications and far less experience of playing these sports myself than I have practicing yoga. Then of course there’s French! French is part of the national curriculum, and I am expected to teach it with only my CSE grade 4 from 1978! If we are talking about the dangers of teaching a subject badly then everything else pales by comparison!

The children have loved it and so have I. It has been a joy sharing my passion and watching them exploring the poses in a completely unselfconscious way. I have linked it with mindfulness which we practice daily, and which has helped them focus on their breathing obviously important for yoga. I believe the children appreciate that they can never fail at it and even the most reserved or physically challenged have thrown themselves in. This year a child in my class who is wheelchair bound with little voluntary movement has been participating fully during our sessions. I have seen children with ADHD, ODD and other behavioural or emotional issues become completely emersed in their practice for some or all the session. There is often a palpable change in the air regardless of what has gone before to one that is calmly energised. There is laughter, discussion, excitement and the energy flows through the room but there is a serenity in it.

Over the years my teaching of yoga has evolved and whereas initially the sessions were discrete I have been able to integrate it within the day too. So, if the atmosphere has become restless or breaktime was a bit fraught we have stopped performed a few poses and could settle again.

A few years ago I did a master’s degree and during my studies I came across Poly-vagal theory, and this profoundly affected my teaching and also how I viewed yoga. Although complex, the core message that I took was that as humans we have 3 main states of being: social engagement, fight or flight and freeze. I could see children (and teachers including myself!) experiencing these states every day and have used yoga and mindfulness to attempt to give the children some tools to self-regulate their own central nervous systems.

I also discovered “Neuroception”. The term describes how neural circuits distinguish whether situations or people are safe, dangerous, or life threatening. From this I used the working theory that in my classroom each person’s internal states was being ‘communicated’ to others who picked up the information through the constant monitory by their neural circuits.

This was all happening internally and unconsciously and that first and foremost I needed to regulate my internal state in order to make the room feel ‘safe’ to all the young neural circuits that were coming in each day. What is the perfect way to regulate your neural circuits? Why yoga and mindfulness of course!

I have on many occasions asked for the children’s help, explaining that I am feeling a bit ‘stormy’ (we have an emotional weather chart on the wall to describe our feelings) and could we do some yoga to get me back to ‘sunny’. The children have enthusiastically ‘helped’ me.

My fall back pose to use is mountain pose. It is so simple and yet so powerful. Feeling our feet firmly on the floor brings us back into our bodies, putting our shoulders back and down and moving the top of our heads towards the ceiling brings a feeling of energy and stability.

The mountains stay the same unmoved by the clouds passing, the cycles of day and night, the thunder and lightning overhead. They stay proud and strong with the passing of each day. The metaphor is not lost on children.

I can say with confidence that teaching yoga has had real impact on the children in my care, certainly more on some than others but everyone has benefited. I do not know what the long-term impact will be.

Anecdotally, I had one parent come in a few years ago who was being physically assaulted at home on a daily basis and whose daughter was experiencing very disturbing physical symptoms from the trauma of witnessing this. The daughter went home and taught her mum the mindfulness and yoga we were doing at school and they both told me how much it helped them.

At the final whole school assembly of the year, I got to talk directly to all the children for the last time. I asked them to raise their hand if they had learned yoga with me and my heart leapt as all the hands went up. I said that if they only did two things everyday it should be to read and do some yoga. Through reading they could find out about the world and escape to new ones and that whatever was happening in their lives yoga could help them feel better.

I don’t know how many of them will follow that advice. I’d like to think the seeds have been planted and although they may not germinate for many years that maybe a few will blossom. Hopefully some will be drawn towards it when they need it most, return to their body when they have left it, rediscover their own breath and the joy of moving with grace.

Everything I have gained on my own yoga journey.

That’s what I would like my legacy to be and that is enough!

Written by Helen Baddon, a 2022 Yoga Teacher Trainee Yoga course for you? In my humble opinion everyone should do a 200 hour yoga course, 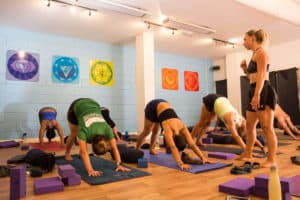 You have just entered the world of hot yoga. If you are new to the activity, you may be curious about what precisely is involved

Close Menu
The phenomenal Yoga legacy of Ali, a retired School Teacher and Yogafurie member of over 10 years!