I wanted to write a little about what how Hot Yoga – and of course Yogafurie – has impacted my life. Things have changed so much for me in less than ten years, and if I’m honest, I’m really looking forward to the next ten. If they’re anything like as exciting then I really won’t have time to get old…

Let me start by – really quickly – talking about how I got into Yoga and, more specifically, Hot Yoga. At school, I wanted to become a PE teacher. However, I was blessed with a family at a young age. When it came to Uni, I really thought it would be better to study IT and engineering. I thought I’d have more money that way – anyone that has a family knows that money is quite a pressure.

I enjoyed IT generally. It was technically interesting, and I met some great people. But my heart was never in it. I was interested in movement really, and this came out as a love of martial arts which I studied and taught. But then I took a very nasty knee injury in a Judo class. I could no longer practice: all I could do after that was swim and practise Yoga.

I’d already been going to Yoga classes, principally to improve flexibility for martial practice. Now I was almost forced to take Yoga more seriously, and it certainly helped with rehab. A cascade of changes had begun in my life, but I hadn’t noticed it at that point. I heard about and tried Hot Yoga, and noticed significant improvements in my knee issues. All in all, I was now getting deeply into practice and I decided to train as a teacher. I would later realise that this was the first of the real outward signs of change – there were more to come.

The next sign of change came at work. I’d taken a less technical, but more senior role. It required travel, and I often stayed in St Albans. I would visit the Hot Yoga studio there in the evening, and I remember chatting to the owner, saying how much I would love to have a studio. She very much surprised me by saying, “Well, don’t get a studio. Just get some heaters and see how it goes. That’s what I did”. That got me thinking, but I wasn’t ready to take any action until my employer announced redundancies. I’d worked very hard to make a success of my new role, and I felt aggrieved to find out that I was one of the people who might have to go.

The studio owners’ words kept ringing around in my head. After a few weeks, I knew I wanted to ask for redundancy… and that’s what I did. I had to think very hard about this, and especially about what I’d do if my employer refused. In the end, I was sure: I was going to leave regardless. I told my manager, and a week or so later, he was able to confirm that I would indeed be selected for redundancy.

Looking back, I feel that Yoga and Hot Yoga had allowed me to find some strength. There’d been rounds of redundancies before – pretty much every year in fact. But I’d never turned the tables on it like this before. I bought my first generation of heaters, and the first Yogafurie Hot Yoga class occurred at David Lloyd in Westbury, Bristol on 7/1/12.

The first year was terribly difficult. I’d had a structured, technical job in a very competitive, male environment all my life. All of a sudden there was no structure, and I was asked to work by using my feelings and creativity. There were hardly any men in my profession, and colleagues weren’t trying to compete with me or outdo me anymore. The portable heaters got me going quickly, but it was hard work carrying them in and out of buildings, setting everything up and packing it down every time. And nobody knew about Yogafurie – there were rarely more than 8 people in a class, usually less. The new strength I had found through practice was helpful, but these changes needed flexibility from me. I had to change my approach completely, and set realistic expectations.

By the end of 2012, I was forced to consider what on earth I would do next. I was running low on money, and the classes were not really taking off. The level of effort was wearing me down, and I really didn’t know where to go with everything. I had always sworn never to use Groupon – but I had a moment of insight and reconsidered. I offered the classes on Groupon.

Groupon was a lot more significant just a few years ago, and to my surprise, the offer sold really well. The room had a capacity of around 25, and frequently all 25 spaces were taken. This was a turning point – and not just for the classes. It was at the end of 2012 that I met Freia, and we have been together since.

Later in 2013, I took a permanent hire in a local play centre where I could install fixed heaters. Yogafurie began to take shape. Between 2013 and 2015, support for classes grew to the point where I could justify the expense of a permanent studio. Freia and I built the studio together, and we also had a lovely little son just a few days before the studio opened.

There have been even more significant challenges since opening, and one day I’m sure I’ll write about them. Let’s just say I’ve had some great help, from Sinead and Freia, from our talented Hot Yoga teachers, and from our students who are nothing short of inspirational people. But just what’s been written already is enough to draw out the impact that Hot Yoga has had on my life. When I needed it, I found strength. When I needed it, I found flexibility. And when I needed it, I found insight and inspiration to think in a new way, and try something I previously resisted. Without really thinking about it (and I’m not claiming credit for this… it just happened) I can now re-frame events in my life, and my relationship to these events. I’m still reflexive and impulsive, but I know I’m doing it and I can change my thinking to match events as they are. It’s not perfect – it’s always a work in progress – but I thank practice for lots of positive changes in my approach. When I change, things change, and life can get a little more frictionless.

The only thing that remains is to keep practicing. Movement and breath – these are literally the medicine, the antidote to sticky, long-term life issues in my experience. They might not work for everyone of course, but given the magnitude of what’s happened for me, I’d always say they’re worth a shot. 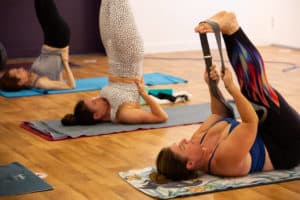 Read More »
PrevPreviousNew Years and all that… Guest article by Gina Hopkins M.SC
NextReflections for Anahata Chakra, your Heart ChakraNext